I’d been buzzing all week for this derby.  Whatever I’ve been doing it’s been there in my mind, somewhere in my mind there was a rendition of Hibs, Hibs or Here We Go, Two in a Row going on.  I was also singing Hibs, Hibs but using other words like “Clips, Clips” and when at home in my freezer “Chips, Chips”.

Hibs created the atmosphere at the Library and I knew if that carried on there would be a  bouncing Easter Road on Wednesday evening in the replay.  Every Hibby was up for it.  And Hearts…oh dear, they were going to do us in the replay.  Where have we heard that before?

I’ll admit that the nerves kicked in big style on Wednesday afternoon.  When work finished and I was a free woman it suddenly dawned (not in the same way that things dawn on Warburton) on me that it was time.  It was hours away from the derby.  Mere hours.  I always get nervous before a derby, I would imagine a lot of supporters do.  Even if confident there’s something that kicks in on derby day.  Mostly it’s to do with not letting them win at all costs.  Especially in this match.

I left Fox Towers jittery.  My overall feeling was that we’d win it.  I won’t apologise for being confident.  No way.  Since 2012 when they did beat us in the now irrelevant 1-5 final, they have failed to beat us in any derby but by their comments and posts on social media they were up for it.  Good on them.

Now, I have been critical of Neil Lennon and I hold my hands up to that.  I can’t say that I won’t be critical of him again in the future but when I first saw the starting XI I thought ‘yes! 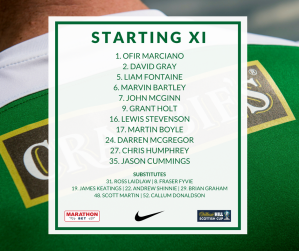 An attacking team!’.  Brilliant starting line-up for me.

The atmosphere inside the ground was amazing long before kick-off.  Three stands absolutely buzzing and one stand gearing itself up for a rendition of their song. Their one and only song.  They can’t even sing it with any feeling at the moment.  They drop their voices at ‘glorious’, well, that’s what it sounds like from where I sit.  Just saying.

The game kicked off and within moments my nerves had settled.  The Jambo fans started their song and they mostly were allowed to sing it before the Hibernian choir started up.

On the pitch Hibs were immediately dominant.  If anyone was worried that they would have a Raith hangover then those worries were gone.  Hibs wanted it.  To a man they wanted it.  Back pockets were being filled all over the pitch.  Hearts were a distaster.  Unorganised doesn’t even begin to describe it but enough about them.

McGinn turning them inside out.  Bartley became a wall on his own, he really comes into his own in these bigger games and that’s fine.  Shinnie was shaky, but he was putting in the effort, he got what the game was about and earned the name Shinniesta from the clubs official Twitter account when he scored.  Holt earned the name ‘Holt Bolt’ after his goal and his performance of The Incredible Holt goal celebration that we were worried about never seeing! Best time to see it happen? In a derby, of course, and doubling the lead created by the man of the moment – Jason Cummings.

He just loves a goal against them eh.  He should savour Every Single One.  Against the club that dumped him.  Yet still you read that he wouldn’t get a game for them…change the record why don’t you? He wouldn’t want a game for you.  It would be a huge step back in a career that is going places.

Unlucky to lose Humphrey so early on in the match.  This lad needs time to prove himself and I was pleased he did start.  However, some things are already written and his injury brought on Shinnie would end up on the score sheet.  Speedy comeback Humphrey, you’ve time yet to show yourself.

El Capitano, Sir David Gray, put in a shift and a half.  He always does.  From nowhere he appears bombing up the wing.  He puts everything on the line to get to a ball.  He has speed and he knows what the game means.  He’ll pick up where others don’t.

McGregor just faultless.  Even his goal.  Was it offside? Or was there something else wrong? Certainly looked OK from where I was but then I was far away.  I’m not sure even the officials knew.  Doesn’t matter.  Although I would have loved to have seen McGregor on the score sheet we were comfortable and that’s what matters.  He’s a worker is McGregor and so is club legend Lewis Stevenson.  As usual, he’s there when you need him.  Eye on the game the entire 90 on Wednesday night.  He watches the whole game.  Fontaine the same.  On Wednesday he was switched on.

Let’s not forget our own wee Squirrel though.  How can we not love this boy? Gives 100% all the time.  I love his pressure on Jack Hamilton for kick outs.  Do this and do it all the time.  It’s not against the rules and I noticed he and Jason started doing it.  There’s nothing wrong with it, pressure Hamilton.  He was nervy and our players were right to pressure him.

So we come to Ofir Marciano.  Rocky.  You did nothing wrong.  A slight fumble on SAVING a PENALTY.  Goncalves (who?) needed a couple of shots to even get it in the net after that.  He’s credited with a goal but no one was surprised that Hearts got ‘their penalty’, I’m just shocked it took so long.  Not getting the clean sheet is annoying but just remember that you saved their usual penalty.

Across the East, West and FF stands the singing was unrelenting.  The East during half time was bouncing inside the concourse.

This is a new era.  This is Hibs turn.  We’ve had to listen to the nonsense from Gorgie for too long.  They were going to win the Champions League, they were going to be the third biggest team in Scotland (wooo, what an achievement).  They ruled Edinburgh, they said, they were the big team.  They’ve had this mentality and it’s mostly unjustified.

Who dumped them out the cup three times since 2012?

Who has dominated the derby since 2012?

Who, out of the two derby teams, has won the Scottish Cup since 2012?

Who has a cup and league winning, forward thinking manager, who Gemma now has more respect for?

Who has a song specific to them, written for them, which was sung by three full stands after the match which was heard three miles away from the stadium?

As Marvin Bartley said after owning his troll…We Run This City.

Sunshine on Leith, as heard within the stadium but three miles outwith.